Since we spoke last quite a lot has happened. TME has now been updated to Unity 5.4, which is quite a step up from the 4.6 version that's currently deployed. The update will roll out with Act 3. For you this will likely mean some perfomance improvements, especially for Linux users. I've also (down?)graded from Unity Pro to Unity Personal Edition. This decision was a cost-cutting one, more below.

I have now also dropped my day job. TME is not paying the bills, so money still has to come from other sources, but I do have a lot more time now to wrap up Act 3. Now, on to that...

(ACT 2 SPOILER?) Act 2 left off with us preparing to ascend the tower. The main thing that sets this one apart from acts 1 and 2 is that you will be able to go almost every place inside the tower. This equals over 900 locations.

When I say "location" i mean basically mean "node" - like every point where you can stand. To put this into perspective, acts 1 and 2 each had between 15 and 20 locations (apartment 1, balcony 1, balcony 2, balcony 3, apartment 2, rooftop, alley 1 etc)

900 sounds scary, and I have to keep reminding myself that it's not. It's all quite samey, with some basic procedural generation handling the variety and look of the floors, walls, offices and various gubbins around the place. The base workload for us on the tower is one floor's locations plus all its variables and the aforementioned gubbins (plans, fire extinguishers, signs, colours, etc). The generator then creates the variety using a fixed seed, and I add the hand-crafted content to that.

900 locations won't stretch out the length of the game a lot either. There will always be enough clues about where to go look for more clues as you work your way up floor by floor, like Bruce Lee in Game of Death. :) When all the required content is in, i will definitely add some extras for explorers to find though.

Anyhoo, have a good rest of August. We shall chat again!

After a wait far too long, act 2 has been released!

Well, it was actually quietly released about a week ago. Even had one bugfix patch at some stupid hour this morning. If you encounter more, please post in the Bug Reports subforum here.

Act 3 development is already underway, but for now I am taking the rest of February off TME. :)

UPDATE 2: So uhhh, it's live, I think. Works for me anyway. :) Now to update the Steam page and do a proper announcement.

UPDATE: Slipping the release by 1 day to address some last-minute issues and some feedback items.

Tiny announcement and will certainly blow the trumpet louder later in the week.

Act 2 is a few bugfixes away from releasable. Got some gamebreakers to fix this evening, then will distribute beta builds for one last round of testing.

8 Feb is probably further away than needed, but since my ability to predict development times suck, methinks it's safer that way.

Very excited to hear what people make of act 2. It's a very in-between sort of episode, with some of it being info-dumpy and set-up for act 3. But there still are a few exciting moments in there and the production values have gone up a notch or two. Also, the addition of the world map and ability to choose destinations some will enjoy.

Anyway, watch this space for the release announcement!

Character art and one week crunch went very well! I'll have an actual release date soon. (It'll be in January). And I suppose we better make a trailer also!

Thanks for your patience thus far!

Character art progressing nicely and looking rather swank! The plan is to have Act 2 in final testing by the end of next week, the 20th. Then, tweaks and bugfixes for a bit, aaand boom!

In the mean time, I present to you, Molly, admiring her taxi, and also a new character.

Her name is Zeelicht and she monitors the production of androids at a big facility nicknamed "Mother". Is she friend or foe? Guess we'll find out. 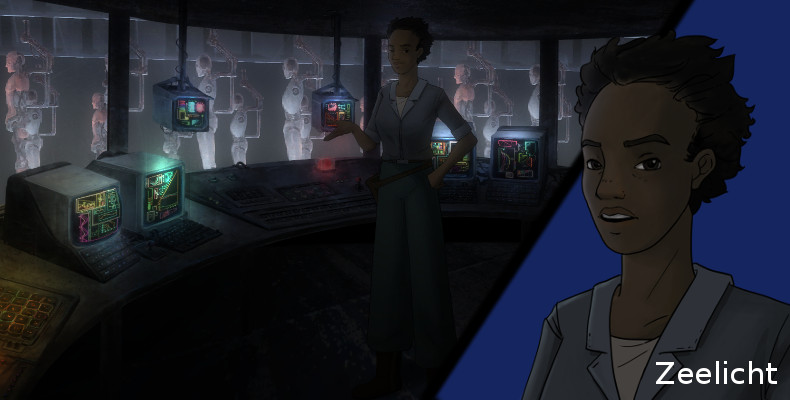 Stop me if you've heard this one before: Hang in there just a bit longer!

Act 2 development going slowly, but moving forward. Development is nearly complete, but a butt-tonne of character art still needs to be done.

I guess this is one of the things about going episodic. It's not easy unless you are pulling in big studio money, or otherwise able to work full time on it. Also from a consumer perspective it can be frustrating. I too have a series or two I am waiting on for new episodes. :)

Another episodic title, The Journey Down, is heading back to Kickstarter to fund its episode 3. If you are a supporter of TJD and would like to support them, you can check that out here:


Luckily we don't need to seek funding for our act 2. Just time. Or adopting some unhealthy work habits, but I've been there and definitely not doing that again!

Thanks for the support thus far!

To those who picked up The Maker's Eden during the recent Steam sale, welcome aboard the "waiting for act 2" train! :) Consider yourselves lucky though as the wait won't be quite as long as for some other folks. We're coming up on the first year anniversary since the launch of Act 1, after all. Progress has been steady, with most of the work being done outside of the house in a cafe where there's less to distract. In fact, this is exactly where I am right now writing this.

So far in act 1 we've mostly just seen the parts of the city that is lived in, but there's another part of the city that's in less good shape. Below is a comparison of what a scene from that part looks like in-game, vs the layers that make it up. You'll notice that it's not flat panels, nor is it 100% accurate 3D. It's just enough 3D so that when the camera moves side to side, or when a light source moves over the floor, the illusion of a 3D environment is kept, while still looking hand-painted.

Story-wise, things are unfolding nicely too. Act 2 is very exposition-dumpy, which has the potential to be quite boring, so we've tried to combat that by keeping the character interactions and environment interactions fun and interesting. The overall idea is the same: Tell a serious story, but in a light tone. The heavy exposition comes from the fact that by the end of act 2 there should be no more surprises or secrets. Act 3 is all action. Well ok, so maybe there's one thing in act 3 you won't see coming. Maybe 2 things.

EDIT:
Ok, just because I am a tease, here's a list of the returning characters from act 1, and the new ones, with some placeholders. Who are these other people??

So, I took 2 weeks off the day job to both unwind a bit and to get some Act 2 stuff done. Glad to say I rate 10/10 on both those things! Most of the work has gone towards putting the completed artwork in-engine. I am dying to show you guys what it all looks like, but with such a short game I feel like every reveal is a spoiler to some extent.

So instead, here's one big scene, again outside and in the rain:

And here are a few of the others, but super tiny because I'm a tease like that:

The individual bits and bobs of act 2 are almost done (except the character art, but we're kinda waiting till the near end before diving into that too deeply), and the only real challenge that remain is the save system.

This will get even more tricky in Act 3, because Act 3 contains some procedural content. Oy. Later, later.

My main workstation also suffered a catastrophic hard drive failure last weekend. TME is unharmed though since that is backed up in two places in addition to the source control. Did manage to partially recover the contents of the drive too and didn't lose anything I couldn't tolerate losing. And in the process also got quite cozy with Linux' dumpe2fs and e2fsck commands.

Finally, the act 2 soundtrack is almost ready to roll out. It'll drop before Act 2. Woop!

This is the day one would expect some joke-announcement like "all further development cancelled" or "it's now about pink ponies". But that'd just be mean, and we best leave that to other people.

Still plodding away at Act 2. It's going slowly, but we're getting there and I have booked some crunch-time off the ol' day-job in April to get it done. Most of the asset creation has been completed and the rest is coming together nicely. The music too is sounding dang smooth. In fact, my greatest worry about Act 2 is that it's all just so much better than Act 1 and people will feel it's out of place. I like how it has evolved though and would love to go back and do a bit of reduxing of Act 1 eventually.

Another day, another alley. Below is a quick work-in-progress shot showing what the artwork looks like vs. what it looks like in-game with the weather added. This particular scene is also camera mapped to geometry so that the perspective is real. In motion the effect is quite subtle so as to not stick out too much from the plain 2d stuff, but it allows for proper reflective surfaces and casting light on surfaces in a semi-realistic manner.

The Maker's Eden is going at a 75% discount on Steam for another 22-ish hours at the time of writing this. Good opportunity to grab it on the cheap! You can also get it in the Groupees "Does time really exist?" bundle for another week - some great music included in that one.

Ben's been busy, and we're happy to share a near-final iteration of the opening theme for Act 2. Give it a listen here: https://soundcloud.com/abstraction/the-makers-eden-act-2-intro-theme

The original plan was to get all 3 acts done before localising. But more and more people have been asking for German, Spanish, Russian etc. We're trying to figure out at the moment how we could get this done at good enough quality with our mighty budget of $0. We stumbled upon a Russian fan-translation and have offered some assistance to them. We'll include that one in the main game, but it'll be clearly marked as a fan-translation. For all the others - working on it!